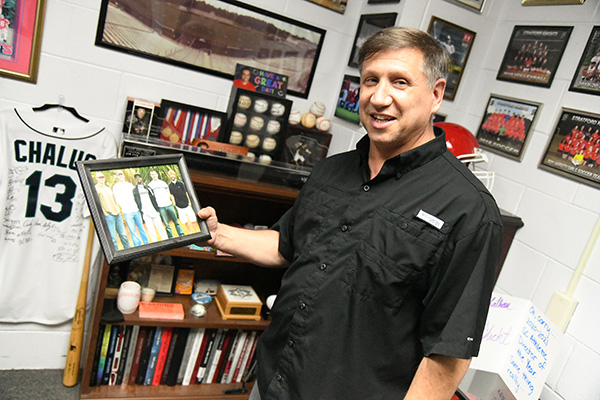 Stratford High School Athletic Director John Chalus is big on teamwork. As arguably one of the greatest baseball coaches to step on a diamond in the Lowcountry of South Carolina, one would expect nothing less.

Before taking the role of athletic director at Stratford, Chalus and the baseball teams he coached amassed more than 450 wins. He does not take the credit. In fact, if you ask, he’s quick to point at photos of players and teams he coached throughout the years that cover nearly every inch of wall space in his office.

“We’re not big for individual things,” he says.

Chalus and three other athletic directors in the state were nominated by their peers in the South Carolina Athletic Coaches Association (SCACA), which is more than 6,200 members strong.

“There’s a lot of ADs (athletic directors) in the state that do a great job. I’m very fortunate. …I have great support. If there is something I can’t jump on or get to, there is another administrator to say, ‘I got it.’ …If there is something that they (SCACA) noticed that we did great, it wasn’t just me. It had to be them (admins and coaches) that helped.”

“We’ve always been very impressed with John,” Dula said. “He has always represented Stratford High School, the district and our organization in a positive way.”

With the challenges presented by the 2020-2021 school year, Chalus is quick to admit that things aren’t perfect. He also admits that he feels a little guilty for being honored when he knows his fellow administrators, his principal and his administrative assistant all work hard, help one another and do the best they can each day.

“We always try to make sure we do the right thing. You can’t get in trouble if you follow the rules. How can you teach a kid to follow the rules, if you aren’t following them. …And you get it all done with the help of other people.”

Doing the right thing, teaching kids to do the right thing and working hard are things that he said have long been part of the culture at Stratford High. He credits great coaches before him like Ray Stackley.

“I was the youngest one when I first started here, so they were always telling me how we do it. It was instilled very young. You’re supposed to respect your sport, respect your profession, do what’s right for the kids and lead by example.”

When asked how he hopes students of Stratford will remember him when they graduate, Chalus without hesitation says he hopes they remember it being fun and safe.

As he stands in his office, surrounded by memories of championships, accomplishments and recognitions, Chalus also gives credit to a supportive family that has understood his passion for coaching, calling of teaching and his competitive nature. There are days when he has worked from 5 a.m. until 9 p.m. in attempt to get ahead. The support at home, he said, can’t be measured.

“A good coach knows the future,” he said. “He can predict what might happen. …The consequences. He can plan ahead that way.”