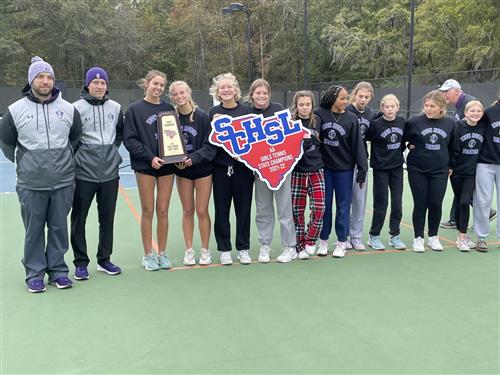 The team went up against Christ Church, who was in the running for its sixth consecutive Class AA state win, but ended up falling to the Iron Horses with a score of 4 to 2.

This was a big season altogether for the Iron Horse girls tennis team; they were named Region champs, Lower State champs, and now State champs.

The girls play under the direction of Coach Richard Schulz. He credited 10th-grader Ansley Cohen as a leading player on the team; she won the tie-breaker match that resulted in the Iron Horses’ state victory.

“She’s the one that led us…with chemistry, leadership and power,” Schulz said, adding, “Our girls are just special, and they’re warriors.”

Cohen went on this past week to compete individually in the state matches in Florence; she placed third overall in the state for Classes A, AA and AAA.

This is Cohen’s fourth year playing for the Iron Horses and said she has been playing tennis since she was about four years old. She is considering college tennis after high school.

She said her team did not know what to expect since they lost to Christ Church last year but the team has gotten better and better over the years.

“This season was really cool because we did a lot better than we did before,” she said, adding that her teammates have grown really close and were very supportive of each other at the state championship. “Everyone tried very hard at state.”

Cohen said she enjoys playing under Schulz’s direction, and also credited Philip Simmons High bookkeeper Anne Magill Payne for supporting the team – “she was a really big part of this season,” Cohen said.

Dan Minkin, assistant principal of athletics at Philip Simmons High, said the team is the first public school to win the AA State Championship in tennis since 2010.

“To watch the girls battle and get revenge on Christ Church, who beat us last year in the state championship, was very special to see,” Minkin said. “I’m extremely proud of all the girls and Coach Schulz.”

It has also been a very active athletic year as a whole for Philip Simmons High; in June, the school was recognized as having the top AA program in the state after being named this year’s recipient of the Carlisle Cup by the South Carolina Athletic Administrators Association (or SCAAA). Philip Simmons High is the first school in Berkeley County School District to win the award since at least 2002.

“Winning the state title in tennis, and four region titles this fall, goes to show that Philip Simmons has solidified itself as one of the premier athletic programs in the state as we look to defend the Carlisle Cup,” Minkin said.

Congratulations to the girls tennis team: