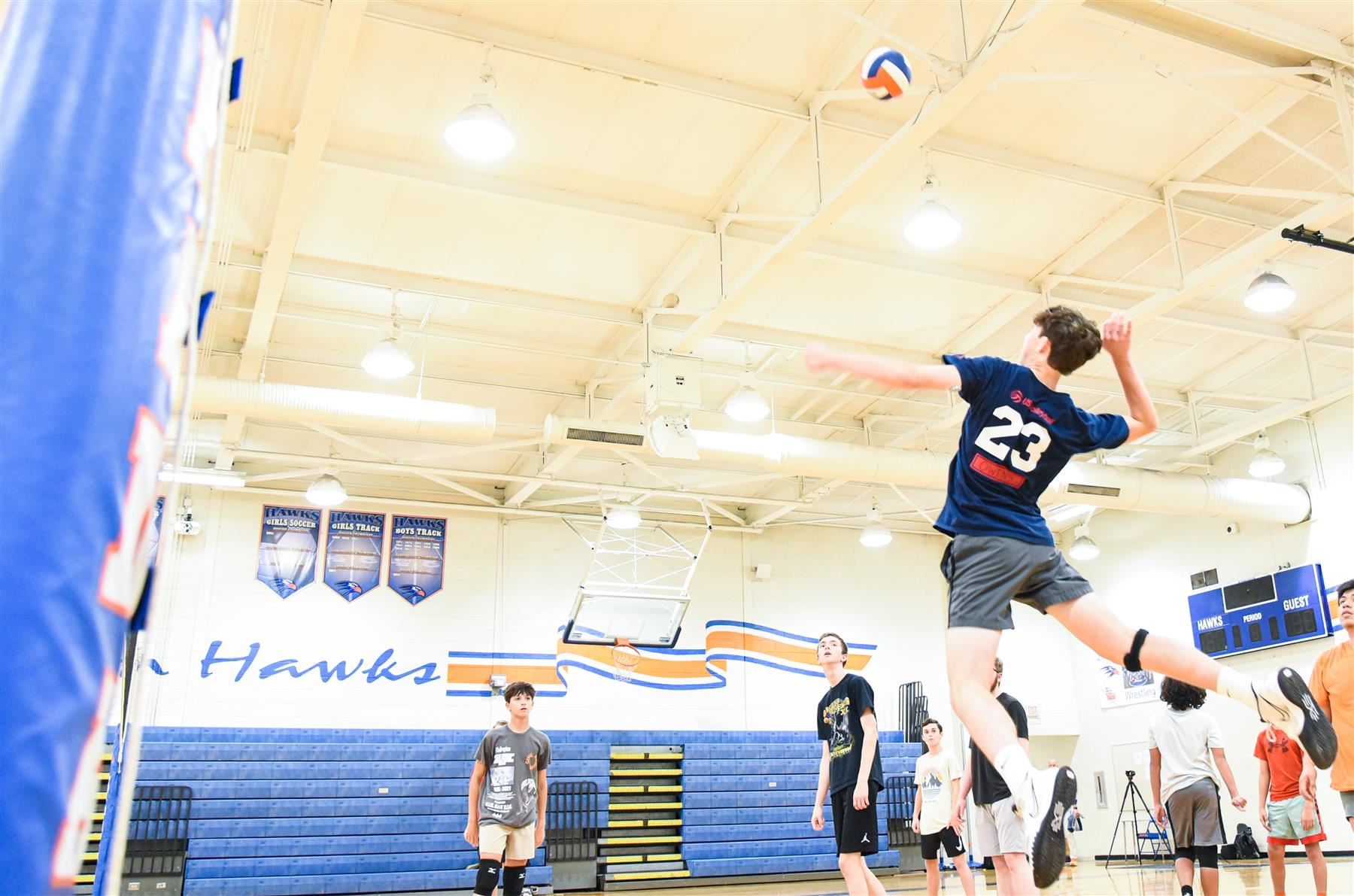 Boys’ volleyball is a rapidly-growing sport in the state of South Carolina.

There are just under a dozen boys’ volleyball programs in the Charleston area, and the sport has expanded across the state with more than 40 high school teams.

In Berkeley County School District there are boys’ volleyball programs at Cane Bay High, Philip Simmons High, Stratford High and Hanahan High; the Hawks’ volleyball program is considered a pioneer in getting more boys playing the sport in the area, and Hanahan Middle Assistant Principal Kelly Owens is part of a state committee that has been instrumental in getting it sanctioned as a sport.

Now that it is officially sanctioned by the SC High School League, the Hanahan Hawks have a handful of players to keep an eye on this season as they continue to hone their skills and establish themselves as athletes in this growing sport. View additional photos from a recent practice.

“It’s pretty big recognition,” Kelly said, adding that boys’ volleyball is one of the fastest-growing sports in the country right now. “It definitely is growing and gives the opportunity for boys to do something different.”

Kelly grew up playing volleyball in the Charleston area. She played for Middleton High, achieving personal accolades like being named an All-Region Player. She also played for two years at Mars Hill University.

Kelly transferred to the College of Charleston and when she graduated, she landed a teaching job at her old high school, plus a junior varsity volleyball coaching position; she later coached varsity for a few years. As an adult, Kelly travelled with women’s volleyball tournaments. Around the time when she started her family, she refereed the sport a few days a week.

Kelly got her own daughter involved in volleyball in fifth grade (her daughter is now a volleyball referee), and the Owens family quickly became a “volleyball family”; her son, Parker (now a sophomore at Hanahan High), would tag along to the gym and to travel club. As a 9-year-old, Parker asked the club coach if he could play on the 12-year-old boys’ team and, after trying out, landed a spot – “and he was good,” Kelly said.

When Parker was in fifth grade he signed up for recreational volleyball, but he was the only boy on the team, which created some pushback from other coaches when his team won the city championship with all the fifth-grade teams.

The following year, the City of Charleston started a boys’ middle school league that has expanded over the years.

In early 2020, just before COVID shut everything down, Kelly was leading a boys’ volleyball club for students from Hanahan Middle and High. Parker was part of that club, joined by many students who were brand new to the sport as well as students who might have previously played elsewhere. Read original story from 2020.

Turning the sport into an actual athletic team was still in discussion at that time, but Kelly serves on the state’s volleyball committee for the Palmetto Region, called Boys’ Volleyball Outreach, and the committee has worked hard to try to get boys’ volleyball going in South Carolina. Kelly said the committee’s goal was to get the sport in the high schools.

As a club, it was a spring sport, but boys’ volleyball became sanctioned as a fall sport by the South Carolina High School League back in April.

Since becoming sanctioned, Kelly said BCSD has truly jumped on the bandwagon.

“We’re super happy with the support from Berkeley County School District because they got right behind putting funding behind it (and) supporting boys’ volleyball, pretty much right after it was passed,” she said.

Getting sanctioned as a sport is a big deal.

“I’m super excited,” Kelly said, adding she has enjoyed seeing the Hanahan boys “blossom and bloom” over the years. “You see the potential and how they have grown and changed.”

This season will not offer an official state championship, but Kelly said there will be one next year. The committee ran its own state championship last school year, which consisted of teams from the lower and upper state. This year’s goal is to do that again.

“We had at least 100 fans that were there,” Kelly said. “College coaches are e-mailing me now. They want to know where we are having boys’ tournaments. They want to come watch.”

Kelly has seen first-hand how much boys really enjoy the sport, describing it as very competitive and powerful. As a non-contact sport, students in seventh through 12th grade can play. Kelly said she would love to see boys’ volleyball in every high school.

After coaching both boys’ and girls’ teams, Kelly can point out a lot of differences between the two games: boys tend to be a lot more “fearless” when it comes to trying anything athletic, while girls tend to navigate more toward step-by-step instruction.

There are a lot of differences between the two games at collegiate levels. The girls’ net is 7’4, while the boys’ net is just under 8 feet. A sequence of playing actions that decides each point from the moment the ball is served until the ball is out of bounds is called a rally. With the amount of power boys may put behind the ball, their rallies tend to be a lot shorter (“It’s a lot faster than girls’ games,” Kelly said).

When it was a club sport, Kelly was allowed to coach the Hanahan team, with high school chemistry teacher Craig Bachman serving as an assistant coach. As sanctioned sports are not allowed to be led by administrators, Owens has turned the reins over to Bachman and continues to root for the Hawks from the sidelines.

Bachman has always loved volleyball, though he noted that growing up it was not a sport for boys – more of just something fun to play during the summer.

He said he has learned a lot from Owens, and is supported by a new assistant coach, AJ Perri.

“I’m just thrilled with the guys who have come out,” Bachman said, adding that they have a large group of ninth and 10th-graders this year. “It’s really going to be neat to see them start in the ninth or 10th grade and have a long time to develop playing against older varsity teams.” The team fell short in their first match of the season on Aug. 31 when they lost 3-0 to Oceanside, but they made a comeback the next day with a score of 3-1 against Battery Creek. The next game is an away game against Stratford and James Island on Sept. 7.

Bachman said the team should have some solid competition this season.

“For this season, I would be thrilled if we had either a tied record, or even a winning record,” he said.

Bachman said the team had a great season last year – though it was not a winning one. He hopes his players can develop their fundamental volleyball skills.

“I really want the guys to stand out as leaders. Currently, the number of male students who have earned a varsity letter in boys volleyball is zero across the state of South Carolina, so I want them to understand they’re pioneers, and we’re basically in uncharted waters.”

“I want the letter that they earn to be something that is actually earned and valued,” he said. “I want them to see this a special place to be, since it’s so new.”

Bachman has a handful of players to keep an eye on this season; Kelly’s son, Parker, continues to be an outstanding player who has established himself as a leader; sophomore Seth Parris is a well-rounded student who is doing a good job juggling his commitments to both ROTC and volleyball and eighth-grader Micah Forbes is a strong middle school player who started off playing recreationally.

“It is neat to be a part of something that is growing,” Bachman said.

The boys echo similar thoughts. Parker said the game of volleyball continues to be a family affair with his older sister refereeing and his mom leading the efforts to make boys’ volleyball a sanctioned sport. His dad, Dan, helps out on the team as well.

Parker has gotten a handful of classmates interested in checking out the sport. He plans to pursue volleyball beyond high school at a collegiate level – and hopefully score a scholarship.

This year, he said, is really a “growing” time as the team continues to progress.

“I think we’re doing good,” he said, adding, “Our team is pretty solid for being this new.”

Parker spoke highly of his teammates and coach, and is impressed with how Hanahan is helping to grow the sport.

“My favorite part about the sport is just how unique it is for boys,” he said.

Micah Forbes originally played football but got interested in volleyball after watching it during the Olympics. Since joining the Hanahan team, Forbes said he has been able to further develop his skills.

“I just enjoyed playing it – I found out I was actually pretty good at it,” he said.

Forbes said what makes his team great is how they handle their wins and losses. He is looking forward to seeing how his team competes this season.

“I heard that the other teams in the area…are doing good,” he said, adding he is excited to see how his team will “stack up” this season.

Seth Parris is in his second year playing, and said he just wanted to try something new.

“I think it’s cool that this (sport) is coming up, so I’m happy to be involved,” he said.

Parris said he really likes to spike the ball (and that he is pretty good at it). His favorite part of his team is the camaraderie.

“They’re all really nice and we all are good together,” he said.

High 5 Friday is the best day of the week!

VIP Senior Pass available at no cost to those 60+