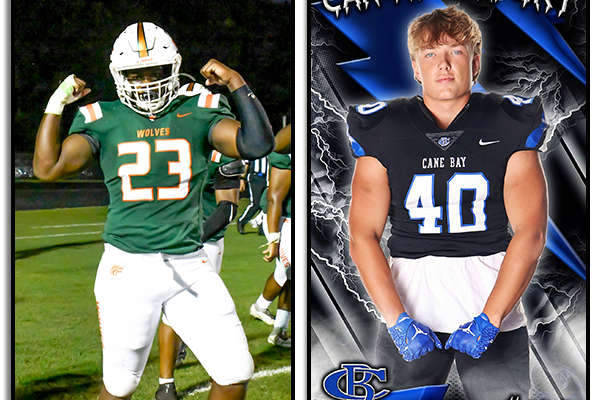 Pictured above, from left to right, are Omari Jenkins and Cameron Avery. The photo of Jenkins was provided by Bridgett Cooper. Avery's photo was provided by Cane Bay High.

On December 17 the best high school football players in North Carolina and South Carolina will face each other in the 86th Annual Shrine Bowl. Two of Berkeley County School District’s student-athletes will be among them.

Cane Bay’s Cameron Avery and Timberland’s Omari Jenkins were both selected for the squad as linebackers. Something they are both known for – their drive.

Avery was recently described by local sports reporter Rob Gantt as “disruptive and deceptively quick.” He averages more than 13 stops her game.

Jenkins plays both ways for the Wolves and has had standout performances, despite battling a hamstring injury. He’s described by head coach Greg Wright as a general. Jenkins currently has offers to play on the collegiate level from Georgia State and Old Dominion.

Also representing BCSD on the field will be Berkeley High head coach Dr. Jerry Brown. He will serve as the head coach of the South Carolina team after being originally selected as the head coach for 2020 and 2021 – both games were canceled due to the COVID-19 pandemic.

The December 17 game will be played at 1 p.m. at Viking Stadium on the campus of Spartanburg High School. Additional information about the game can be found at www.shrinebowlofthecarolinas.com.

VIP Senior Pass available at no cost to those 60+