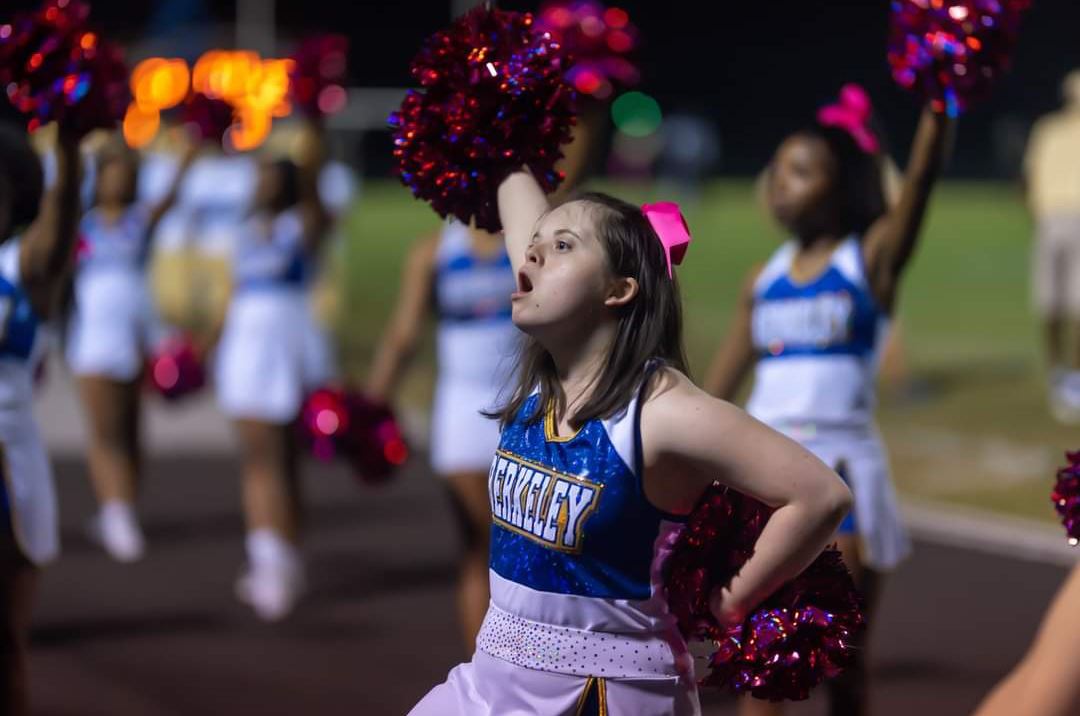 That evening was all about celebrating Berkeley High’s cheerleading squad at the team’s awards banquet. Jaden did not know going into it, but she was surprised with receiving her Athletic Letter during the ceremony.

Students earn their Athletic Letter when they have participated in a varsity sport that year. This semester was Jaden’s first time on her school’s cheerleading squad – and she loved every minute of it.

Jaden is a young lady with Down Syndrome. She is basically the student spokesperson of Berkeley High because of how much she adores her school. Those that really know her can promise that Jaden is a leading example that a student with special needs has no limits.

Jaden’s mom, Linda Glasgow, is one proud momma when it comes to her daughter.

It can be daunting, to say the least, when a child is born and the doctor tells the new parents that the child will never sit up, or be able to walk or talk, or even eat with a fork.

Jaden overcame all that – “she can even eat with chopsticks, for crying out loud,” Glasgow said. “It just goes to show you that a child that has Down Syndrome or any special need…there is no limitations on them unless you place it on them.”

Glasgow said the more children with special needs are included in any normal activity, the more independent they become, and the more confidence they build.

“There’s just no limits, I believe, with them – especially with her,” Glasgow said. Jaden is 19 years old and her education plan allows her to be at Berkeley High until she is 21. When she comes to school she gets most excited “to see my favorite teacher, Coach Welch,” she said.

“She goes to school every day with a smile on her face – what kid does that?” Glasgow said, adding, “And she loves her friends in the class – sometimes she’ll put extra snacks in a bookbag to take to other kids in the class.”

Both Caggiano and Welch said Jaden has truly blossomed over the years at the school.

“She has come a long way,” Caggiano said.

Welch is in his seventh year at Berkeley High and Caggiano is in her fifth year. They both love Jaden as much as she loves them – “She’s a rock star,” Caggiano said.

They attribute the success of their special services department to being able to utilize unique programs with their students.

“It allows us to do some cool things,” Welch said, adding that “transition” is a key part of what they do with their students. “It’s all about work experience and being competitively employable so they can transition from Berkeley High to the work force.”

Special services teachers help students accomplish such goals by keeping them pretty busy at school. Every Thursday is “Cookie Day” in the special services department, where the students help sell freshly-baked cookies.

“We actually just ordered a new cookie cart…so they’re going to decorate the cookie cart,” Caggiano said. “The students are really excited about that.”

Jaden’s favorite class at school is called News to You, a sort of current events class that covers weekly, age-appropriate topics. She also likes her school’s Unified P.E. class, where she gets to do a lot of fun games while paired up with a general education buddy.

The special services classes also did virtual “social hours” with Hanahan High’s special services program during the pandemic and the two schools recently got together for an outing at the movies. It was their first time getting to meet the Hanahan friends in-person.

Special services teachers at Berkeley High help get the students set up with internships to give them real work experience. Jaden herself works very hard at her own internship. In fact, she does not come to school at all on Thursday, because instead she is getting valuable work experience at Northwood Church, made possible through conjunction with the Vocational Rehabilitation department in Moncks Corner. This is her second year working with the church.

Jaden and her classmates will also do different little jobs for departments throughout the school, like helping the guidance or attendance offices. She really looks forward to fire drills, because she gets to help by making announcements via walkie-talkie to let school officials know they need to be prepared for the drill.

“We’re able to do these things throughout the week, all the time, almost every day,” Welch said. “It’s definitely beneficial for the kids.”

Cheerleading added another big commitment to Jaden’s schedule this semester, but she never faltered.

“She never complains – and it’s a long day,” Caggiano said.

The year before COVID hit, a couple of cheerleaders who were familiar with Jaden approached Welch and Caggiano to suggest asking if Jaden’s parents would allow her to cheer with the group.

Glasgow said Jaden wanted to cheer so badly, and was very excited about the idea…and then COVID hit.

When the 2021-2022 school year came about, Jaden’s step-father – Glasgow’s husband, Jay – reached out to cheerleading coach Missy Loftis to ask if Jaden could join.

Loftis has a heart for students with special needs and was very eager to get Jaden on the team. She said she made a big impact on everybody.

“She made the team. …She was a perfect fit,” she said.

The more Jaden went to practices, the more she fell in love with cheerleading. One of her favorite parts was getting to do a stunt where her teammates held her up in the air by her legs. Jaden said they held her up there “for a very long time.” “She thought that was the grandest thing ever,” Glasgow said.

Jaden really liked her teammates, as well as her cheer coach, Missy Loftis.

“She is a very nice coach…she helped me do that stunt thing,” Jaden said.

Loftis said Jaden was a little nervous for the stunt at first – she went about four feet in the air – but she kept practicing and gained a lot of confidence in herself.

Initially Jaden only cheered at home games because she was not able to ride the bus with the rest of the team, but then her mom was able to get her to some of the away games if they were not too far away.

Glasgow would be the first to sing Jaden’s teammates’ praises.

“Jaden loves every single one of them, and we love them for just being open with her and…welcoming her onto the cheerleading team,” Glasgow said, adding, “The friendships she formed through that – it just makes my heart so happy.”

While cheering, Jaden particularly enjoyed the dancing aspect of cheerleading – her favorite song to dance to is “Party Rockers.”

She still remembers all her cheers too – her favorite was:

“Everybody loves Jaden,” Coach Loftis said. “She learned so quickly, that everybody was impressed with her. She was always so friendly, always all smiles.”

Loftis also said Jaden was very big on showing off her cheerleading coach at any chance she got.

“She always told everyone who I was,” Loftis said.

Coach Welch said cheerleading has been great for Jaden.

“It takes a tremendous commitment from Jaden, as well as her parents,” he said. Glasgow recalled that Jaden was so excited to attend the awards banquet last week, and everybody was excited for her when she received her Athletic Letter.

“We were so proud of her,” Glasgow said. “She came in with a smile on her face and said, ‘Look what I got, Mom,’ and she was just so proud, and we were too – we couldn’t be more proud of her.”

Jaden even got up in front of all the cheerleaders and adults and did a cheer all by herself during the banquet.

Jaden plans to cheerlead next football season too.

“I look forward to that,” Loftis said, adding, “As long as I’m the coach, she’ll be on the team, she said.”

Anybody who has ever been to Berkeley High knows the Alma Mater is more than a school song – it is more of like a cheer, as students regularly sing it after a big win for their school, whether it be an athletic event or a well-received performance. The Berkeley High Alma Mater is unique to any of Berkeley County School District’s high schools in that the students and staff always sing it while extending their index and pinky fingers in the air in the recognizable “Stag” symbol.

“This school is really the heart of the community, and it’s just cool,” he added.

The Alma Mater is played at the school every Friday. Normally it is led by an ROTC student, or maybe a member of the school’s choral program. However, Welch recently made a request to have Jaden lead her classmates in the song on Oct. 29 – which happened to be Senior Night, as well as the weekend of the school’s last home football game. She led the song while wearing her cheerleading uniform. Watch video.

Jaden said she was well-received by her school after her edition of the Alma Mater.

“They were clapping and cheering for me,” she said, adding the reception made her happy.

It was a moment that Loftis said brought tears to her eyes.

“I thought that was amazing,” she said.

Loftis said she hopes anyone who has special needs will look at Jaden as an example of perseverance, and be able to tell themselves: “You don’t have to be afraid; you can do this.”

Glasgow attributes a lot of her daughter’s growth and success to the strong bond she has with Berkeley High.

“I have to say that she has learned the most, blossomed the most, and found herself more at Berkeley High School than any other school she’s ever attended,” Glasgow said. “To me, Berkeley High, and the special needs team there, there’s nobody like them, and I could never thank them enough for the way they have really encouraged her, and helped her grow. They’re just great. They’re awesome.”